Excuses do NOT equal Results

I will do everything I need to do to accomplish it. This time it’s going to be different.

The message always seems so promising, overflowing with optimism, and my hope and spirit gets lifted. Again. Regardless of the past, the thought dulls the pain from all of my previous failures and immediately rekindles my spirit. This time I will not accept any excuses, only results.

Ironically, these used to be my words, but now, they are those of strangers. And deep down, I think that hurts me even more.

Approx. 9 year ago (May of 2008) I received an email from my friend Rick. He said that he was selling his car (Porsche), and knowing how much I had always admired it, wanted to know if I was interested in buying it.

Rick and me in 2006, right after he had purchased his new car. At 320 pounds, I was barely able to squeeze in behind the steering wheel.

Even though I didn’t really need it, I was interested, but rather than continue the conversation via email, I figured it would be easier to discuss it over the phone. When I asked him why he was selling it, he paused and simply said “I’m dieing”. Hoping I had heard him wrong, I said “come again?” and that was when he opened up to me. I later learned that I was one of the first people he had told.

The conversation immediately shifted to his health and the car had no place in the conversation. Not knowing what to say, I let him vent his frustration, his fear and sorrow. Fortunately I discovered his impending death was measured in years and not months. The bottom line is he had time, not a lot, but enough to get everything in order.

After a long sigh on his end, indicating to me that he was done talking about the subject, I decided to try and lighten the conversation, hoping to get a laugh out of him and said “Guess who is going to run the 2009 Boston Marathon in ten months?”. This was my latest scheme at beating my lifelong battle with morbid obesity, and as I knew Rick was a former triathlete, expected a good laugh. Again there was a pause, no laugh, followed by “Do you have a trainer?”.

It’s funny how things just kind of work their way out. Before that phone call, I would have had to have answered “no”, but after the phone conversation, I now could say “yes”.

When I asked him how much he would charge me he replied “I don’t want any money, but just 100% commitment from you. I will tell you what to do and if you do that, I will continue to be your coach. If you start coming up with excuses then I’m afraid that I will not be able to train you anymore”.  I agreed with a virtual handshake and that was our contract.

My friend, and now trainer, Rick.

Right from the very beginning, I found myself faced with numerous assignments or tasks that I didn’t want to complete, but I always thought back to my commitment I had with my friend and the agreement that we had struck, and I was able to crush the excuses that I normally would have used. I looked at Rick’s offer to help me as my last chance at losing weight and saving myself, and just as Rick had discovered, you never know what tomorrow will bring.

I owed it to myself, and more importantly to Rick, to never give up. 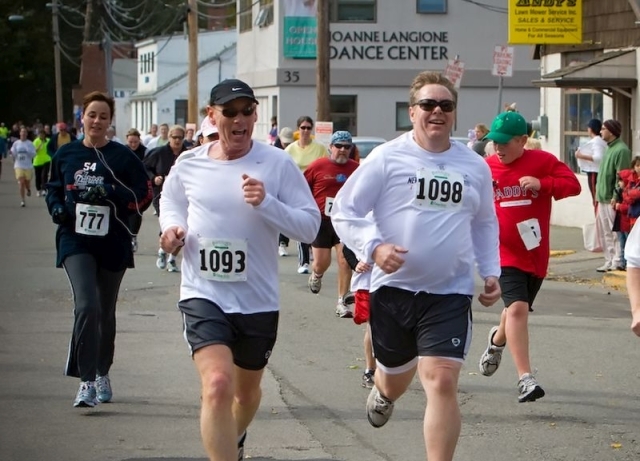 Rick and me at my first 5K, approximately 4 months after I started my training. At this point I had lost approximately 55 pounds.

By the time I ran the Boston Marathon, ten months after I started my training, I weighed 163 pounds. Even though I could only run 10 yards when I started, I was able to run the entire 26.2 miles nonstop. How? Because, as per our agreement, I did exactly what Rick said and never gave him an excuse to leave me.

I needed him, and as I eventually discovered, he needed me. 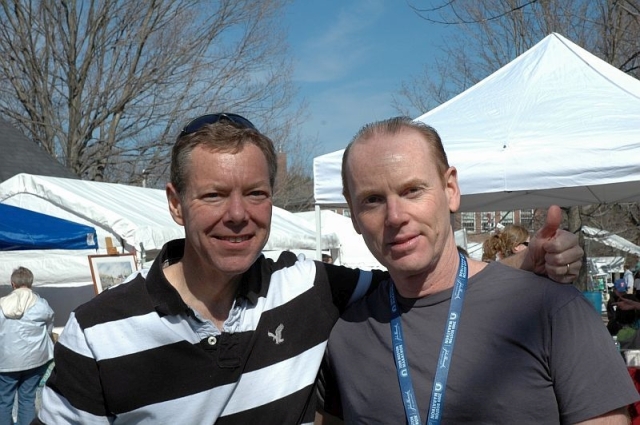 Rick and me the day before the 2009 Boston Marathon

Thanks to a video I made showing my progress that ended up going viral, people reach out to me for my help. And just as Rick had helped me when I needed his help, it was my turn to help others when they asked for mine. And just like our agreement, the only thing I ask of people is 100% commitment and no excuses.

I would love to tell you that all of the people that I have worked with have all had the same results as I did, but unfortunately as much as it pains me to say, they have not. Like the quote at the beginning of this post, everyone starts out as an optimist, with true desire to change their life, but unfortunately they allow excuses to get in their way and the vast majority soon fade away. Just as I did for the vast majority of my life, I always

Just as I did for the vast majority of my life when I failed at my diet, gave up on my goals, etc , I always comforted my failures by telling myself that there always a tomorrow.

Rick passed on July 1, 2015. And like Rick, none of us are immortal, and sadly our days here on earth will someday end. Give up on excuses and make the most of your life today, because someday, tomorrow will never come.

NOTE: This piece was originally written for Eat Drink and Be Skinny on September 1, 2017