What is that one picture that describes the lowest point in your life?

WELCOME: I built this site to chronicle my 10 month journey from 320 lb “couch potato” to marathoner back in 2009. After I accomplished that goal, my new goal was to continue running marathons (69 as of March 2021) in order to raise money and awareness for Cystic Fibrosis, as well as set an example for others that they too can change just as I did.

If you need help please feel free to contact me: Roger@RFME.org.

VIDEO: If you are here to watch the video of my journey that went viral (9 million+ views), here it is. You can watch the other videos I have made by clicking HERE.

What is that one picture that describes the lowest point in your life?

This is another piece I wrote on Quora.net (a question and answer site) that now has almost 700,000 views!

Someone posted the question What is that one picture that describes the lowest point in your life? As usual, I started as a short piece and ended up getting longer and longer…

Who is that person with my wife? 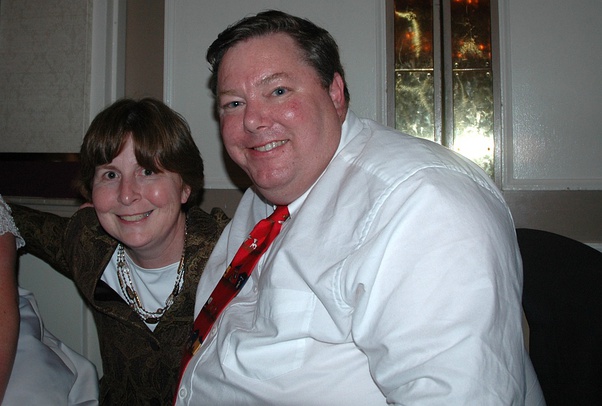 Back in 2006, my wife (Mary) and I attended the wedding of our niece (Lisa) in Boston. I took quite a few pictures, always preferring to be behind the camera instead of in front of it. And because it was a wedding. I joined in the festivities and had my share of drinks.

The next day I was going through the pictures, renaming the files with the names of the people in the pictures, when I stumbled across the above picture of my wife and some guy who I didn’t recognize. As mentioned, I had had a few drinks the day before, but unlike all of the other pictures, was at a complete loss identifying the man in the picture.

In an attempt to unravel the mystery man in the picture, I looked at the pictures immediately before and after, in hopes it would shed some light in helping me identify him.

The picture before (017) was of two of our nieces, followed by the “?” picture” (018 – I cropped the original image) and then (019) my wife and our niece, Lisa. After going back and forth a couple more times, I finally gave up and showed the picture to my wife asking “Who is that guy beside you?”.

At first she thought I was joking, but quickly realized I was serious and reluctantly said three words that kind of brought my world crashing down around me:

I was shocked and had a quick debate in my mind if she could somehow be mistaken. Looking at the picture and focusing on the tie I was wearing (I suffer from Prosopagnosia

aka face blindness), I realized and accepted that she was right and it was me. In order to try and save face (no pun intended), I immediately tried to regain my composure, brush it off and did my best to convince her that I was only joking around.

It seemed to work, but in retrospect, I now doubt that she actually bought it and felt bad for me and this discovery. That is the kind (stress on the word “kind”) of person Mary has always been.

As far as who took the picture, she reminded me that my niece Sarah (017) had offered to take our picture after I took her and her sister’s picture and I hesitantly agreed. Like I said, I prefer to be behind the camera instead of in front of it, and in large part, just for this reason:

I have always hated pictures of myself.

Here’s a classic from the 70s (I was 15) that should NEVER have been taken and I should NEVER have kept it and I definitely should NEVER have posted it on the interweb, but I need to keep you interested so you make it to the end. So so many things wrong with this picture and while this would be a good candidate for What is the one picture that describes the lowest point in your life I didn’t really know any better at the time. Frankly, I have always been a pretty happy person and no doubt at the time, felt that I really had it going on, especially being all “dressed to the nines” and such. 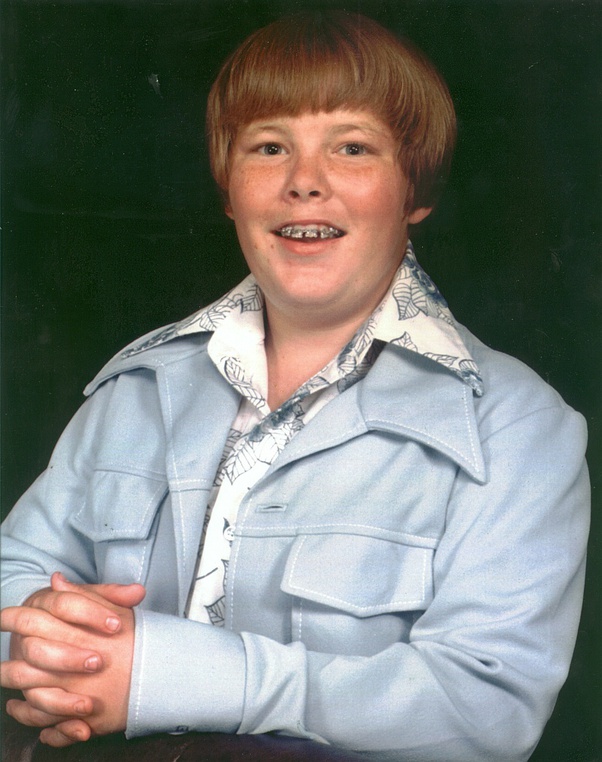 The reason I posted the above picture (beyond my hope that it gave you a laugh) is to show that I have been obese my entire life, moving into the “hefty” category starting when I was around 10. There have been so many That’s it, damn it! moments where my eyes were opened, telling myself This time it will be different and will work! and tried in earnest to lose weight, be it a new diet, joining a new health club, Weight Watchers, etc..

Like a broken record, I would lose a few pounds and eventually, after a few days, start my fall off of the diet wagon and at the same time, find excuses why I couldn’t exercise that day. By the end of the week, the plans that started out so optimistic, had been completely derailed. I blamed everything other than myself for it’s failure, eventually moving on to a new approach to weight loss the following week or month.

This cycle continued over and over for approximately 25 years.

It also helped that I could convince the person staring back at me in the mirror (which was less and less as I gained more and more weight) that I wasn’t “that” heavy. As far as pictures, I justified that it was just a bad picture thanks to a poor angle, lighting or the person taking it. 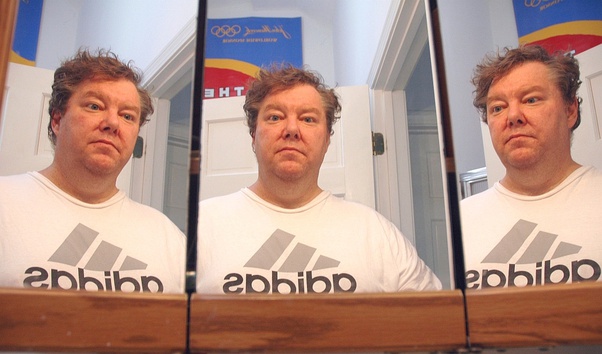 I don’t know when or where, but at some point my mind decided that my outside perception by others would be determined by my own, more favorable, internal perception of myself.

It’s strange, but even though the scale said 318 and the pants I wore had a 54 inch waist, I would always come back to my belief that I was really only 20–30 pounds overweight. Although illogical and delusional, somehow I could justify these thoughts. To a normal person it doesn’t really make sense, but speaking from my own experience, it did.

And that is why this picture hurt me a little bit…no, it actually hurt me a lotta bit more.

It was around that time (I was 45), that I decided to keep a promise to my wife (I’ll go see a doctor when I’m 40…) and finally went to see a doctor about my health. The doctor confirmed that I was as bad as I feared (actually worse) and she reluctantly suggested gastric bypass surgery, which I had read about and desperately wanted. To me, it promised an easy fix to a lifelong battle with my weight. Plus unlike actually sticking to a diet and increasing my exercise, it took no discipline on my part other than jumping through a few small hoops (or large ones in my case I suppose…), attending a mandatory pre-surgery seminar and signing some papers.

Within two weeks, I happily found myself at a hospital in Boston listening to the mandatory 3 hour info session about the voluntary surgery. At the beginning, I received all of the positive news that I had anticipated and even more that I hadn’t. But, as required, they also pointed out the few possible negatives of the surgery (3% mortality, possible future internal issues, etc). I was surprised to find myself walking out and shaking my head “no”.

The surgery would NOT be my savior

It’s a very long story but after a series of events that happened in one week in May 2008 (I had just turned 47), and even though I hated running and had never really run a mile in my life, decided to run the 2009 Boston Marathon (a race my father had run when I was 7 years old). In the process I could raise money for Cystic Fibrosis, a disease my niece Julia (wow I have lots of nieces!) suffers from and lose some weight (I was hoping for 50 pounds).

When I told Mary my plan, she looked at me with tears in her eyes and said “I think it’s important. If you do, I’ll have a friend at every mile”. We hugged and that sealed the commitment I made to her, as well as to my niece Julia. 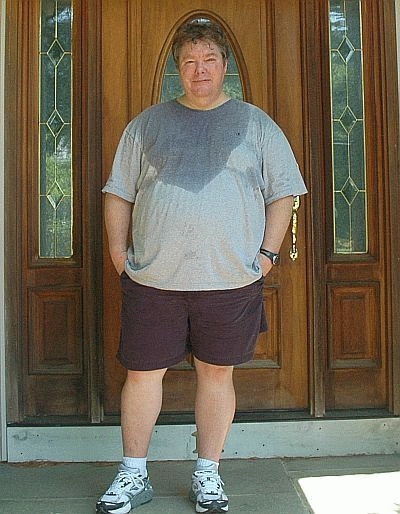 And every day of those 10 months as I worked out and felt like giving up, I kept repeating the following mantra to myself: If I fail, I have failed her. If I let her down, I have let us down. 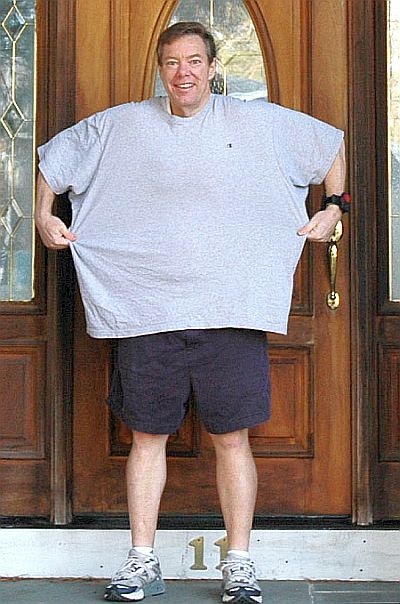 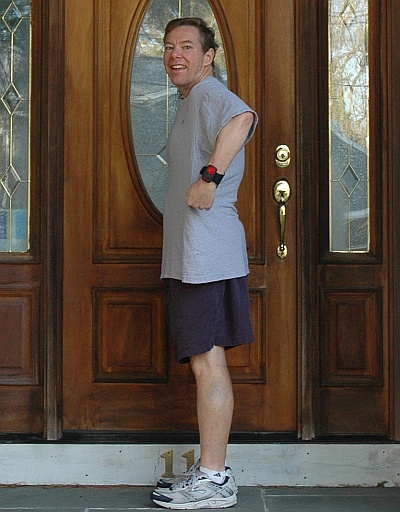 Here I am with my niece Julia at a party my wife threw for me after I finished my marathon. In the background you can see pictures I took every month (on the 7th) and posted on my website to document my weight loss and keep me accountable. 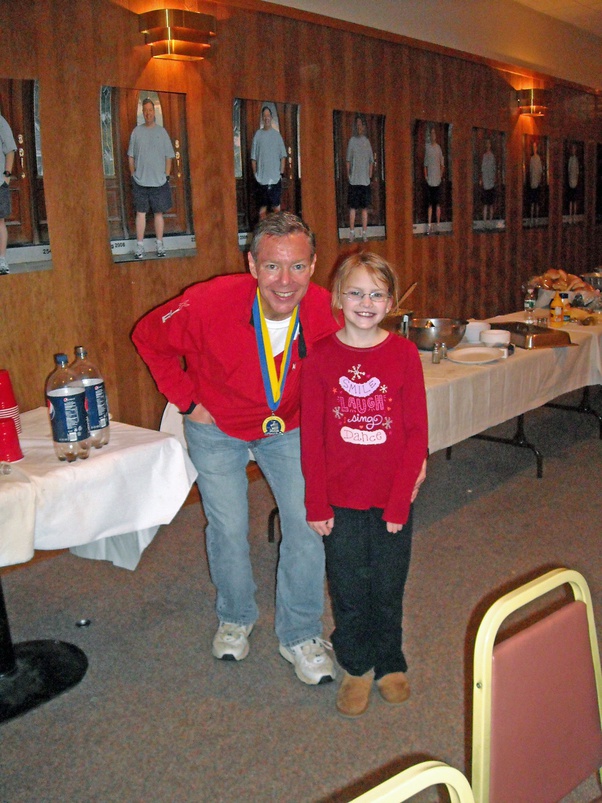 BTW, if there was a Quora question asking “What is the one picture that describes the HIGHEST point in your life?” this would probably be it.

A few days before I ran the race, I made a Cystic Fibrosis fundraising video soliciting donations that I sent to friends and family. A year and half later a friend asked if he could repost and rename the video and I agreed. It ended up going viral with over 9 million views and he called it (embarrassingly) The Most Inspiring Video You Will Ever Watch

And the first picture in the video? The one that started this whole post!

That picture at the start of this story was taken ~13 years ago and below is a recent (Sept 2019) picture of my wife and me. I continue to run marathons (just completed #66 three weeks ago) and every time I cross the finish line I give thanks for the ability to finally change my life. 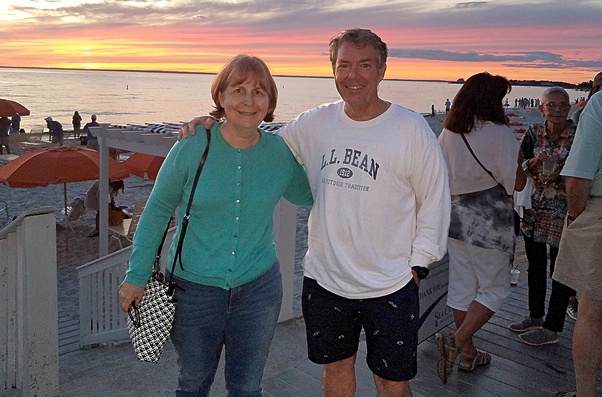 Thanks for reading and have a nice day (or night).