Why I NEED To Run The 2019 Boston Marathon

Why I need to run the 2019 Boston Marathon

Please note that the explanation below was originally sent as an email to Dave McGilivray (race director of the Boston Marathon) first, and then forwarded to the BAA back in November 2018. To date, I have not received a response back from the people I sent it to at BAA.

UPDATE: January 5, 2019. In December 2018, due to Julia’s failing health, my brother Prescott, his wife Deb and my niece Julia flew out to the Cleveland Clinic and she was placed on the lung transplant list. I have added this as Reason #6 (Julia and Her Family) but have kept the original letter intact to explain my story and reasons for requesting an entry for the 123rd (2019) Boston Marathon.

When I was 7, my father ran Boston in 1968 and it had been a goal to run in his footsteps someday. In June 2008, I was 47, almost 300 pounds and hated running but dedicated myself to run the 2009 Boston Marathon. A big part of the reason I was running was  to raise money for the Cystic Fibrosis Foundation, a disease that my then 9 year old niece Julia suffers from.

In 10 months, I lost ~120 pounds, went from running 10 yards to running the entire Boston Marathon non-stop, with a pulled calf. 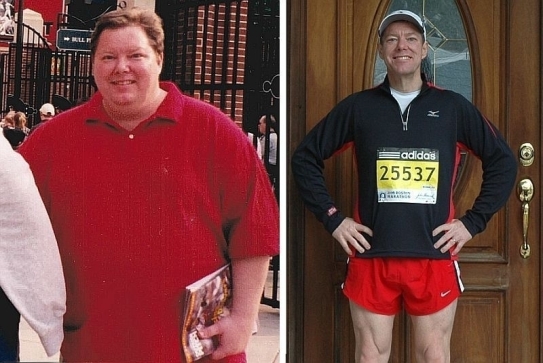 To raise money for the CFF, I made a video that I called “My Journey To The Boston Marathon” which was reposted/renamed “The Most Inspiring Video You Will Ever Watch”  by a friend. It went viral and currently has over 9,040,000 views.

Below is a list that I have compiled to explain why I am asking for an Invitational Entry to run the 123rd Boston Marathon. Probably won’t seem it, but I tried to be brief.

My name is Chanyanut Nisaret. 38 years old. I just want to Thank you for your blogs and your story which made me believe that I can do it too. I started from 126.2 kg on August 12th, 2017 to walk at first until November 2017 I started to run on treadmills 10 minutes. And on June 2nd, 2018, I did my first marathon in my life in Stockholm marathon. And I had crossed the finish line of 4 marathons since June 2018.  My next marathon is on November 4th, 2018  New York City marathon. I´m today 72.6 kg. Because of you, I had the courage to start my marathon journey and now I´m training to be a triathlete. It´s so amazing journey. It was really hard but I did it! Thank you so much for your inspirational story.

Thank you for your consideration and any help you could provide.